Beginning about 13.8 billion years ago, the story of the past is a coherent record that includes a series of great thresholds. Beginning with the Big Bang, Big History is an evidence-based account of emergent complexity, with simpler components combining into new units with new properties and greater energy flows. 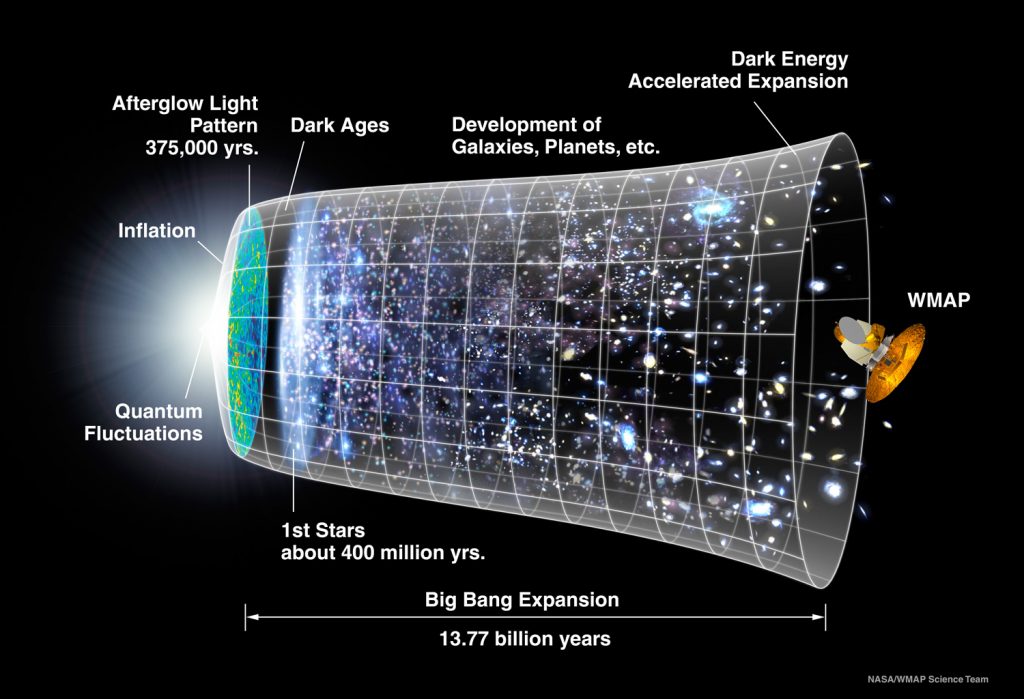 The Beginning of Space and Time in Our Universe

In the first moments after the Big Bang, the universe is thought to have been so hot and dense that matter could only exist in the form of a soup of quarks and gluons. (What explains the Big Bang itself?  We still need to figure this out to our satisfaction.) As the universe expanded and cooled, matter could take on new forms, including the first protons and neutrons, followed much later by neutral atoms. Though the early universe was almost perfectly uniform, slight non-uniformities existed from the beginning, and over cosmic time gravity has enhanced those non-uniformities, pulling matter from less dense regions into more dense regions. This has produced the large-scale structure of the universe that we see today, including galaxies, galaxy clusters, and superclusters.

Within galaxies, gravity causes the collapse of gas clouds to form stars, which combine atomic nuclei to produce heavier elements through nuclear fusion. Before the first stars formed, the universe contained only hydrogen, helium, and small amounts of lithium (created in the first minutes after the Big Bang, when the universe as a whole was still hot enough to sustain fusion). But massive stars create carbon, oxygen, and all manner of heavier elements through fusion all the way up to iron. When these stars run out of fuel and explode as supernovae, the huge amounts of energy released often allow for the formation of even heavier elements like gold, uranium, and others. The heavy-element-enriched gas propelled outward by a supernova mixes with pre-existing gas and dust clouds, which may then collapse under gravity’s influence to form second-generation stars. Because first-generation stars had created heavy elements, these were available for gravity to form rocky or terrestrial planets. 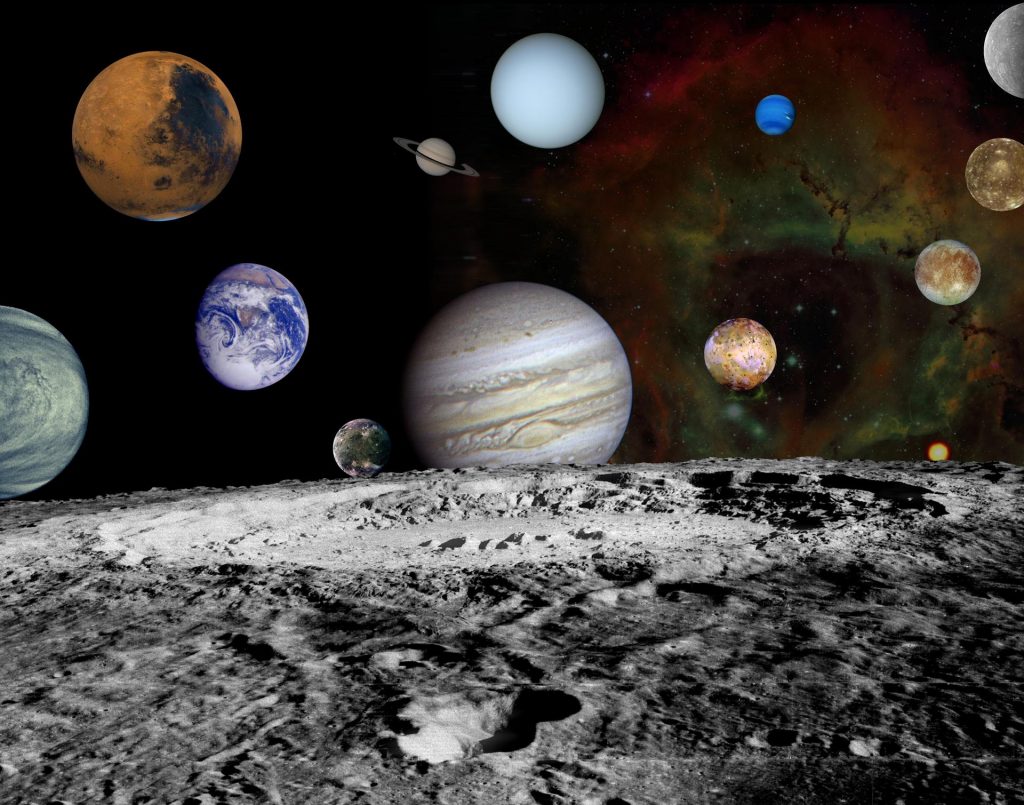 NASA ID: PIA02973, This solar system montage of the nine planets and four large moons of Jupiter in our solar system are set against a false-color view of the Rosette Nebula.

The Beginning of Our Solar System and Earth

The formation of our own Sun and Earth took place about 4.6 billion years ago. The Solar System is located in one of the Milky Way’s outer spiral arms, known as the Orion Arm or Local Spur. We are between 25,000 and 28,000 light years from

the center of the Milky Way galaxy, which consists of a few hundred billion stars. We are traveling around that center at a rate of about 220 kilometers per second, completing one revolution every 225- 250 million years. Over the past 4.6 billion years, the Earth has seen many chapters in its own history, with changes in atmosphere, the appearance and continual reformation of land masses through plate tectonics, and many other transformations. 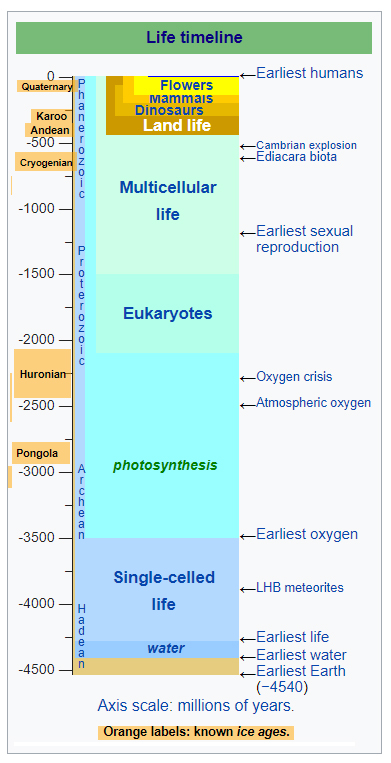 The Beginning and Evolution of Life

Elements and molecules on the Earth formed various combinations in a process of chemical evolution, although exactly how still eludes us. About 4 billion years ago, some of them formed membranes, gained access to additional chemicals and energy that became metabolism, and became able to reproduce with variation. What is called life then began its own highly uneven process of evolution, sometimes becoming more complex and diversified. Major transitions led to such features as cell nucleii, photosynthesis, intentional motion, multicellular specialization and cooperation, heads, backbones, four limbs, and many other features.

The rise of mammals following the extinction of dinosaurs some 65 million years ago led to the emergence of hominids. Eventually Homo sapiens emerged 200,000 years ago. Bipedal, largely hairless, large- brained, and with opposable thumbs, humans developed symbolic and imaginative language, inherited a social nature, and made ethics explicit.

The Beginning and Development of Culture

Through our culture, humans shaped some of the natural forces from which we emerged. We added hunting to scavenging and gathering. Beginning about 70,000 years ago, we left our African home and migrated throughout the globe, crossing Beringia into the Americas some 20,000 years ago (though the precise date is still heavily debated). We formed bands, kinship groups, villages, chiefdoms, cities, nations, and empires. Our species crossed other major thresholds with the emergence of agricultural states, the burning of fossil fuels, and the recent entrance into an information-rich, digital era.

We have fought many wars among ourselves and brought about environmental degradation and resource depletion. These and other problems threaten the quality and even survival of our species. We face a current crisis and a possible loss of complexity. Over 99% of the species that have ever existed are now extinct. No complex species is likely to survive intact for more than a few million years; we will be lucky if we survive that long.

Can Big History Help Us Now? 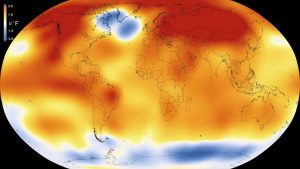 2015 was the warmest year since modern record-keeping began in 1880, according to a new analysis by NASA’s Goddard Institute for Space Studies. The record-breaking year continues a long-term warming trend — 15 of the 16 warmest years on record have now occurred since 2001.

Does Big History provide a narrative that can help nurture the development of the empathy and cooperation that are part of our social nature? Can humans form a more perfect human community as we continue to create a more complex society than has existed before? Or will our current levels of social complexity face inexorable demise?

Whatever the answers to these questions, any species still surviving on Earth a few billion years from now would be well-advised to hop a spaceship to another solar system. Those still on Earth will face a much hotter sun. About 5 billion years from now, the Sun will run out of hydrogen fuel in its core and will grow into a red giant, evaporating the oceans and possibly engulfing the Earth. The Sun will eventually eject its outer layers, leaving behind its core, a white dwarf that will cool and fade over trillions of years. Meanwhile, other galaxies may keep racing away from our own Local Group of galaxies, perhaps leaving us with a sky devoid of the images of distant galaxies that have contributed so much to our understanding of the universe and the cosmic context of the Earth.

Have other universes already existed?  Will there be more universes after ours has ended?  Are there an infinite number of universes, perhaps with some even sharing our space?

Can you help us find the evidence to answer these questions?  Can you draw on the lessons learned to help solve our problems now?

I gave a talk called “Speaking Up: the Origins of Language” a few years ago.